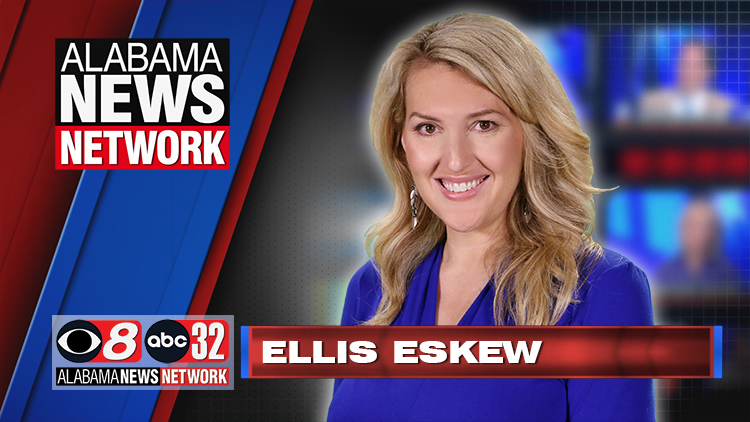 She got her start in TV in her hometown of Dalton, Georgia. From there, she went on to report for stations in Chattanooga, Tennessee, and Huntsville, Alabama, where she was anchor/producer for the FOX affiliate.

Ellis graduated from Brenau University in Gainesville, Georgia, with a degree in Mass Communications/Broadcast Journalism. Her senior year, she interned at CNN in Atlanta.

Ellis has received several awards for her work, including “Best News Anchor” from the Alabama Broadcasters Association. She competed against news anchors from all across the state, regardless of market size, to win this recognition.

Ellis says one of her most memorable stories includes getting to travel with 100 World War II veterans to Washington, DC to see the war memorials. It was called Honor Flight. Telling the amazing stories of these brave men and women was an honor for Ellis, and she believes they truly are “The Greatest Generation.”

Ellis also got the opportunity to fly in a CH-47 Chinook helicopter with the Georgia National Guard Armory to cover their training in Fort Stewart.

When she is not reporting the latest news, Ellis enjoys traveling, working with kids, drawing and painting and being active in her church and community.

Our Pay It Forward honoree this week is Patricia Holliday June of Montgomery. She is an advocate for the homeless and works to help beautify her community.

Our Pay it Forward honoree this week is DebbieAnn Woodard, who is the manager at the Tallassee Senior Center.

Dr. Qiana Matthews is an associate professor in the Microbiology PhD program at ASU, where they are investigating therapies to combat the coronavirus and common cold.

Sonza Yelder Winters works at Walmart and is also a minister at New Hope Missionary Baptist Church in Selma. But it's what she does outside her main jobs that made her friend, Jan Crews, nominate her for the Pay It Forward award.

Our Pay it Forward honoree this week is Larry Johnson of Montgomery. He goes above and beyond to lend a helping hand wherever he can. "Larry is a genuine,…

Jasmine Kennedy graduated from Alabama State University in 2016 and came back to her home in Wilcox County to give back. As Executive Director of the Wilcox Area Chamber of Commerce,…

Jacqueline Hurt is a registered nurse. She works long hours in the ER and at a nursing home.

Sidney Williams may not have an official role inside Montgomery Public Schools anymore, but he absolutely has a role in each student's and teacher's life. "At the beginning of the year, I…

Sharon Daniels says she has always had a desire to help others whether it's teaching and mentoring youth or taking care of family members.

Tammie Rice is a co-owner of Carter Rice & West Funeral Home in Greenville. Although she may have to see people during times of their sadness, in her spare time…