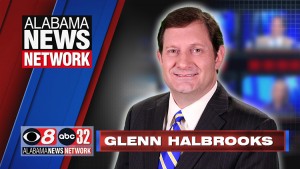 Glenn Halbrooks is the news director for Alabama News Network. He was the weeknight anchor/managing editor from  2003 until being named news director in 2014. He still appears on the anchor desk occasionally.

Glenn is a native Alabamian, born in Huntsville.

He has more than 30 years of experience in TV news. He began reporting at WMAZ in Macon, Georgia, while still in college.

In 1990, Glenn moved to Montgomery and anchored the noon news at WSFA for nearly two years. He went on to anchor jobs in Birmingham and Chattanooga, Tennessee, before spending several years behind the camera.

Away from the station, Glenn served as president of the Montgomery Rotary Club for 2012-13 and has been recognized as a multiple Paul Harris Fellow by Rotary International. He’s involved with several community groups including the Hugh O’Brian Youth leadership organization, the Leukemia and Lymphoma Society and the Muscular Dystrophy Association. He is also a member of the Advisory Council for the Alabama State University Dept. of Communications.

Glenn is a graduate of The McCallie School in Chattanooga and Mercer University in Macon, where he is a member of Eta Chapter of Sigma Nu Fraternity.

Glenn and his wife are members of Montgomery’s Young Meadows Presbyterian Church (PCA) where they have taught children’s Sunday School.

It was 50 years ago that Alabama Gov. George Wallace was shot while campaigning for president. In a rare interview in 2007, former First Lady Cornelia Wallace spoke about the day that would change their lives forever.

Former President Donald Trump has rescinded his endorsement of Rep. Mo Brooks in Alabama’s U.S. Senate race in a major blow to the congressman’s campaign.

Tallassee police say a woman was shot and killed Friday morning. They say the suspect was later captured in Phenix City.

What the Tech? What You Must Know Before Booking Travel Online

There's no shortage of travel websites that offer bookings, reviews, recommendations and comparisons. If you've ever used one to find good deals, you may have noticed that most travel sites offer similar prices. Why?

Here are the funeral details for former Alabama Secretary of State Nancy Worley.

One Person Dead after Confrontation at Main Gate to Gunter Annex

One person has died after a confrontation at the main gate to Maxwell Air Force Base's Gunter Annex.

New Memorial to Rosa Parks to Be Dedicated in Montgomery

A new memorial to Rosa Parks will be dedicated in Montgomery on Wednesday, Dec. 1., which is Rosa Parks Day.

Opelika police say security video shows the woman taking a laptop and a doorbell camera from a Best Buy store.

Live updates | McIlroy surges as Woods falls 7 behind at PGA