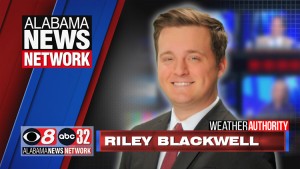 Weather Authority Meteorologist Riley Blackwell joined Alabama News Network in June of 2021, after graduating from Mississippi State University with a degree in Meteorology and an emphasis on broadcasting.

Riley is no stranger to weather in Alabama, growing up in the small town of Sylvan Springs, west of Birmingham in Jefferson County.

Riley grew up hearing stories about family members being impacted by severe weather, such as his aunt just managing to avoid the April 8, 1998, F-5 tornado that destroyed Oak Grove High School in Jefferson County.

Riley says the defining moment for him to pursue a career in weather happened in April 2011, when an EF-4 tornado passed only about two miles south of his home and destroyed two cities where he had played sports and spent time.

Riley says it seems he has always been the one his friends came to when severe weather was impending, even before his professional training. He has always found joy in explaining the situation to friends and family, and giving them ample time to prepare if a severe situation were to arise.

Riley was also a part of the 2017-2018 National Championship Disc Golf team at Mississippi State.

When Riley is not monitoring the weather, he enjoys spending time with his girlfriend, playing video games, following his beloved Boston Red Sox, and hunting and fishing. Riley accredits his love of outdoors to his love of weather, as the two go hand in hand. He says spending time hunting or fishing or just being in nature, observing Mother Nature in action, brings him a sense of peace. He also enjoys older country music, and has also been Type 1 Diabetic since December of 2011.

You can watch Riley weekends on Alabama News Network and see him reporting live from Thunder Truck during severe weather.

So far today, most of the area has seen a lot of sunshine, with the exception of some spotty showers. Temperatures have been near 90°, and that heat is only going to be rising throughout the week. #alwx

Temperatures across the area have easily eclipsed the mid 80s, as much of the area was much closer to 90° today. Storm development has remained relatively low today, so the majority of the area has seen a good mix of clouds and sunshine, with more of the same expected for Sunday. #alwx

This Mother's Day has been near picture perfect, and is helping kick off a wonderful week of weather. Highs will be in the mid to upper 80s throughout the week, rain chances will stay minimal, and sunshine will be in full supply. #alwx

Aside from a cool start, this Saturday has ended up with beautiful skies, cooler temperatures, and dry air. Plentiful sunshine will be around for the weekend, and Mother's Day is looking very nice. #alwx

We have seen some stronger storms today, especially in south Alabama. These storms produced a lot of lightning as well as some hail. This summer-like weather pattern with warmer temperatures and afternoon rain/storms will continue into the week. #alwx

Afternoon Rain Chances and Temps On The Rise

Early on, we've seen a good mix of clouds and sunshine, as well as warmer temperatures. However, the closer we get to summer, we will see better chances for afternoon showers and storms like we saw today. #alwx

Other than some fair weather clouds, today has featured more warm temperatures and a good supply of sunshine! More of the same is expected for Monday, with slightly warmer temperatures and morning clouds. However, our streak of warm and dry days will conclude Tuesday, as a weak cold front will move through the area and bring some rain. #alwx

Warm And Dry Weekend, But Rain Returns Next Week

We've had a near picture perfect Saturday, with slightly above average temperatures and a lot of sunshine! Clouds will be moving in temporarily this evening, but mostly clear skies and sunshine will return Sunday. However, a slight chance of rain exists for Tuesday. #alwx

Warm and Dry Days Continue Into The Weekend

High pressure to our northeast has helped this Earth Day turn out very nice! Temperatures are slightly above average, and the string of warm and dry days will persist into the weekend. #alwx

So far, most storms have stayed below severe limits. Some small hail and a lot of lightning have been associated with these storms, as well as a couple of tornado warnings for Clarke County earlier today. Another threat exists for Easter Sunday, with damaging winds and hail being the main threats. #alwx

Live updates | Official: US in talks with Sweden, Finland

Dow sinks 1,000 points, or 3.2%, as dismal results from Target renew fears that inflation is battering companies