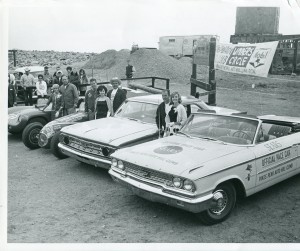 COLORADO SPRINGS, CO — (News Release) Commissioned by Thomas Jefferson to explore the Great Plains, Lt. Zebulon Pike first saw Pikes Peak in 1806 from the eastern portion of today’s Colorado in 1806. As he approached the magnificent peak, rising abruptly from the plains, Pike swore this mountain would never be conquered by man.

Zebulon Pike never scaled the mountain which bears his name. But today, Pikes Peak has been climbed by tourists from all over the world by car, motorcycle, bicycle, train, mule, horse, and on foot. Most visitors are overcome by its beauty, including Katherine Lee Bates, who was inspired by the view from the summit to compose the famous lyrics to America the Beautiful in 1893.

Pike could have imagined neither the vehicles nor the automobile racecourse which would conclude at the summit of his peak a little over a century after his first sighting. By 1900, a carriage road had been built. Spencer Penrose, one of Colorado Springs’ city’s major benefactors, realized the tourist potential of such a beautiful landmark and in 1915 he finished converting the narrow carriage road into the Pikes Peak Highway. In order to publicize his new road, and draw visitors to his Broadmoor Hotel, he devised a simple plan; run an automobile race to the summit of Pikes Peak. The Pikes Peak Auto Hill Climb was first held on August 10, 11, and 12, 1916 and Rea Lentz was crowned the winner with a time of 20:55.600.

Drivers, then and now, are challenged by the torturous road and the rapidly changing weather. Starting out in sunshine, the driver could travel through sleet, thunderstorms, wind, hail, fog, or blinding snow before finishing, earning this famous race the descriptive term “The Race to the Clouds.”

Over the 100+year history of this event, auto racing legends have pitted themselves and their machines against the mountain. American racing families from across the country have championed the course – names like Unser, Mears, Pastrana, Zwart, Vahsholtz and hundreds of others. International competitors have also etched their mark on Pikes Peak including Nobuhiro “Monster” Tajima, Ari Vatanen, Walter Rohrl, Michele Mouton, Rod and Rhys Millen, Sebastien Loeb and most recently Romain Dumas who set a new course record in 2018 of 7:57.148.

The Pikes Peak International Hill Climb is the second oldest motorsports race in America and a long-standing tradition in Colorado Springs and the Pikes Peak Region. The race is run on a 12.42 mile (and now fully-paved) course with 156 turns that begins at 9,390 feet and finishes at the 14,115-foot summit of America’s Mountain.

You can watch the Pikes Peak International Hill Climb LIVE on https://www.alabamanews.net/sports/pikes-peak and on the Alabama News Network mobile app Sunday, June 27th, starting at 8:00 AM CDT!