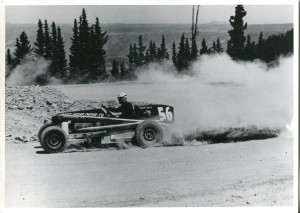 From his earliest days on Pikes Peak, Unser’s racing talent was evident. His first entry in 1955 was in the Open Wheel division where he finished 5th, behind brothers Louis J. and Jerry, in a field of nearly 30 competitors. In 1956, Bobby Unser won the Open Wheel division, setting a new course record in the process. This was the first of eight course records Unser would achieve on America’s Mountain, including an unprecedented five consecutive overall records from 1958 through 1962.

King of the Mountain, the title given to the fastest driver each year was bestowed on Unser ten times, more than any competitor in nearly 100 years of racing on Pikes Peak. He raced and won in the Open Wheel, Sports Car, Stock Car and Rally divisions. After a 12-year hiatus, Unser returned to competition in 1986 determined to best the overall record of 11:25.390 set in 1985 by France’s Michèle Mouton. As usual, he accomplished what he set out to do, and once again his name was etched in the record books. He raced the Audi Quattro Sport to the summit in 11:09.220.

“I knew Bobby for 44 years. He was a mythical legend to me who became a good friend,” said Bob Gillis, former chairman of the board for the Pikes Peak International Hill Climb. “Not only did he win on Pikes Peak again and again, but he was perhaps one of the greatest ambassadors for this race. He brought drivers like Parnelli Jones and Mario Andretti to Pikes Peak. When he returned to the mountain with Audi in 1986 to recapture the King of the Mountain crown, he proved he was never better behind the wheel.”

Bobby Unser became a legend on the 12.42 mile course to the summit of Pikes Peak, and beyond and, by his own account, his success on Pikes Peak opened doors. As a world-renowned driver, Unser moved on to race and win at tracks around world, but he never forgot his roots. Inspired by the generation that preceded him, especially his uncle, Louis, Bobby Unser knew what he wanted and set out to get it. His competitive nature was nearly always evident, but so was his willingness to help fellow competitors by sharing advice and offering encouragement.

Bobby Unser was among the first inducted to the Pikes Peak Hill Climb Museum Hall of Fame in 1997. His tribute reads:

“Fans of the Pikes Peak Hill Climb will greatly miss Bobby Unser,” shared Don Sanborn, President of the Pikes Peak Hill Climb Historical Association. “As a driver, his feats on Pikes Peak were unparalleled, with eight course records and 10 King of the Mountain titles. As an innovator, his collaboration with Goodyear Tire Company resulted in the Pikes Peak Special, a tire unmatched in its ability to provide traction and for many years was used by all competitors as the go-to tire for the dirt race course. As a story teller, he could entertain for hours with stories about Pikes Peak. From a humble start with no money for race fuel and nothing but an insatiable desire to go fast on Pikes Peak, Bobby realized his dreams through pure grit and determination.”

Bobby Unser has left an enduring legacy on Pikes Peak. His sensational career inspired generations to dream of what was possible and to follow in his footsteps. He accepted the challenge, embraced the danger and conquered the mountain. He will be greatly missed.

You can watch the Pikes Peak International Hill Climb LIVE on https://www.alabamanews.net/sports/pikes-peak  and on the Alabama News Network Mobile App Sunday, June 27th, starting at 8:00 AM CDT!

Shooting and Police Chase on Carmichael Rd. in Montgomery